The Uyghur inmates sat in uniform rows with their legs crossed in lotus position and their backs ramrod straight, numbered and tagged, gazing at a television playing grainy black-and-white images of Chinese Communist Party history.

This is one of an estimated 240 cells in just one section of Urumqi No. 3 Detention Center in Dabancheng, seen by Associated Press journalists granted extraordinary access during a state-led tour to China’s far west Xinjiang region. The detention center is the largest in the country and possibly the world, with a complex that sprawls over 220 acres — making it twice as large as Vatican City. A sign at the front identified it as a “kanshousuo,” a pre-trial detention facility.

Chinese officials declined to say how many inmates were there, saying the number varied. But the AP estimated the center could hold roughly 10,000 people and many more if crowded, based on satellite imagery and the cells and benches seen during the tour. While the BBC and Reuters have in the past reported from the outside, the AP was the first Western media organization allowed in.

This site suggests that China still holds and plans to hold vast numbers of Uyghurs and other mostly Muslim minorities in detention. Satellite imagery shows that new buildings stretching almost a mile long were added to the Dabancheng detention facility in 2019.

[T]he AP’s visit to Dabancheng, satellite imagery and interviews with experts and former detainees suggest that while many “training centers” were indeed closed, some like this one were simply converted into prisons or pre-trial detention facilities. Many new facilities have also been built, including a new 85-acre detention center down the road from No. 3 in Dabancheng that went up over 2019, satellite imagery shows.

The changes seem to be an attempt to move from the makeshift and extrajudicial “training centers” into a more permanent system of prisons and pre-trial detention facilities justified under the law. While some Uyghurs have been released, others have simply been moved into this prison network.

However, researchers say many innocent people were often thrown in detention for things like going abroad or attending religious gatherings. Darren Byler, an anthropologist studying the Uyghurs at the University of Colorado, noted that many prisoners have not committed “real crimes by any standards,” and that they go through a “show” trial without due process.

“We’re moving from a police state to a mass incarceration state. Hundreds of thousands of people have disappeared from the population,” Byler said. “It’s the criminalization of normal behavior.”

During the April tour of No. 3 in Dabancheng, officials repeatedly distanced it from the “training centers” that Beijing claims to have closed.

“There was no connection between our detention center and the training centers,” insisted Urumqi Public Security Bureau director Zhao Zhongwei. “There’s never been one around here.”
They also said the No. 3 center was proof of China’s commitment to rehabilitation and the rule of law, with inmates provided hot meals, exercise, access to legal counsel and televised classes lecturing them on their crimes. Rights are protected, officials say, and only lawbreakers need worry about detention.

“See, the BBC report said this was a re-education camp. It’s not - it’s a detention center,” said Liu Chang, an official with the foreign ministry.

However, despite the claims of officials, the evidence shows No. 3 was indeed an internment camp. A Reuters picture of the entrance in September 2018 shows that the facility used to be called the “Urumqi Vocational Skills Education and Training Center”. Publicly available documents collected by Shawn Zhang, a law student in Canada, confirm that a center by the same name was commissioned to be built at the same location in 2017.

Records also show that Chinese conglomerate Hengfeng Information Technology won an $11 million contract for outfitting the Urumqi “training center”. A man who answered a number for Hengfeng confirmed the company had taken part in the construction of the “training center,” but Hengfeng did not respond to further requests for comment.

A former construction contractor who visited the Dabancheng facility in 2018 told the AP that it was the same as the “Urumqi Vocational Skills Education and Training Center,” and had been converted to a detention facility in 2019, with the nameplate switched. He declined to be named for fear of retaliation against his family.

“All the former students inside became prisoners,” he said.
…

Urumqi No. 3 Detention Center is comparable in size to Rikers Island in New York City, but the region serves less than four million people compared to nearly 20 million for Rikers. At least three other detention centers are sprinkled across Urumqi, along with ten or more prisons. 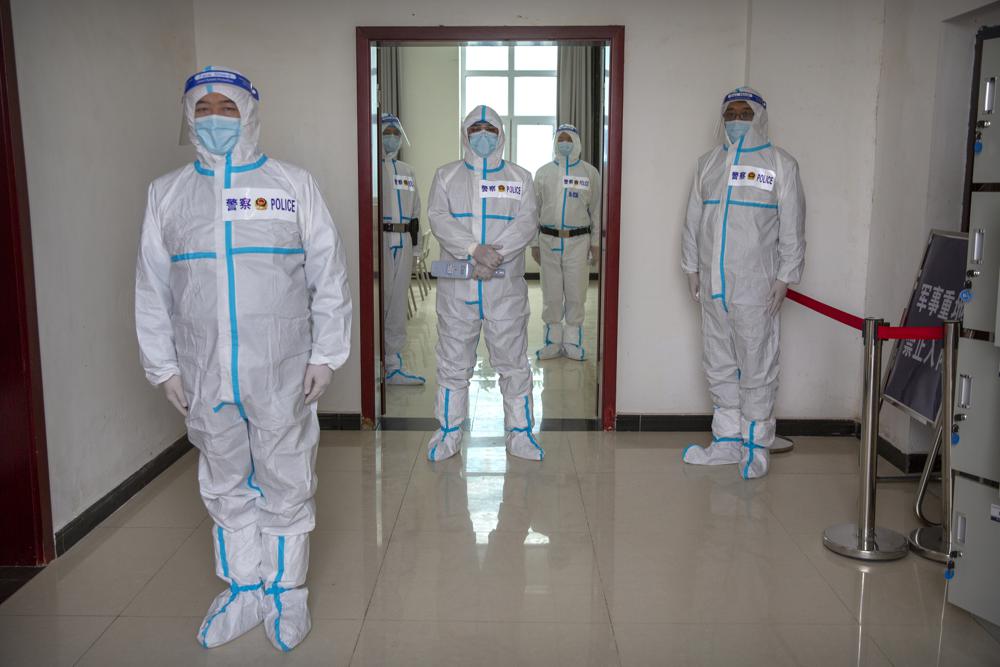 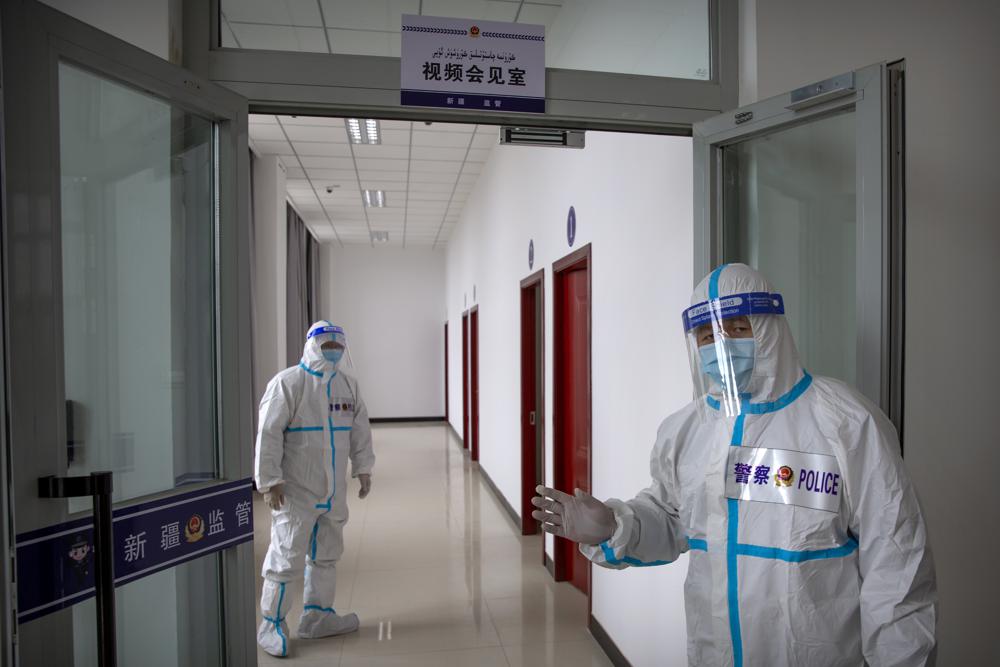 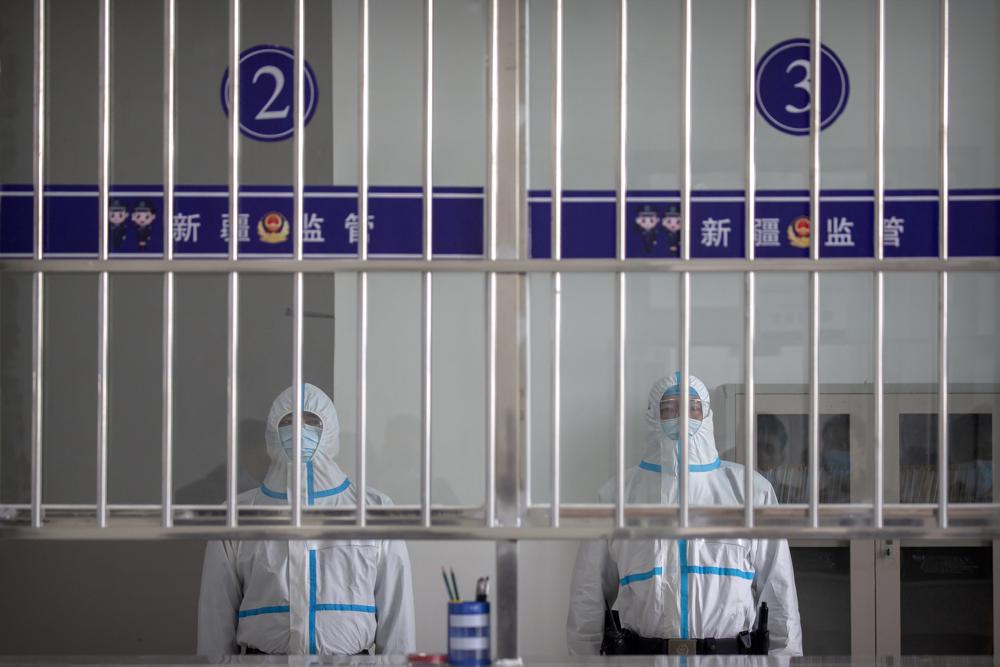 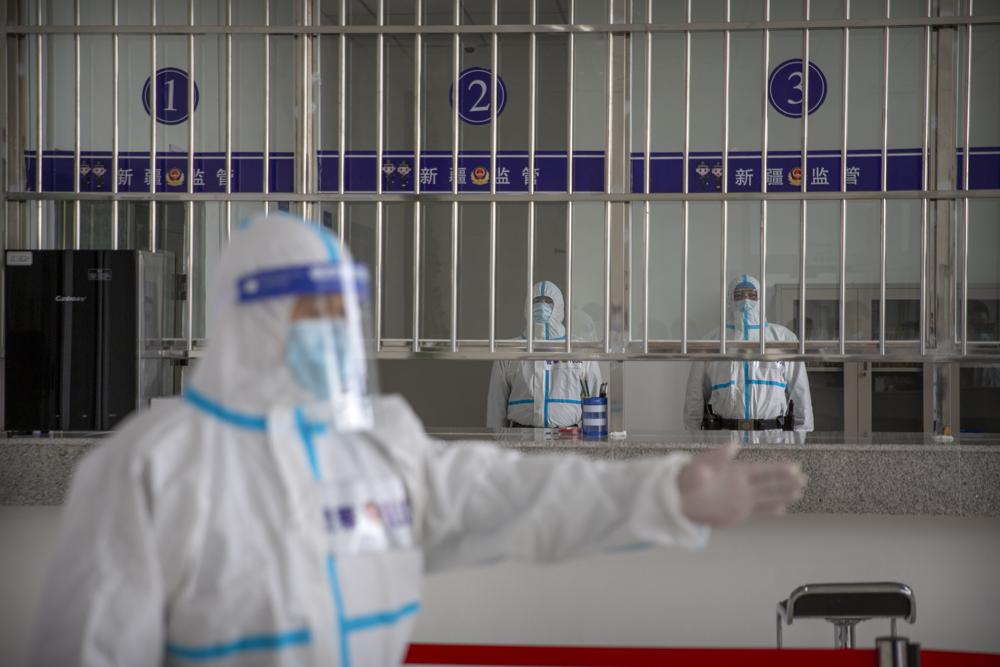 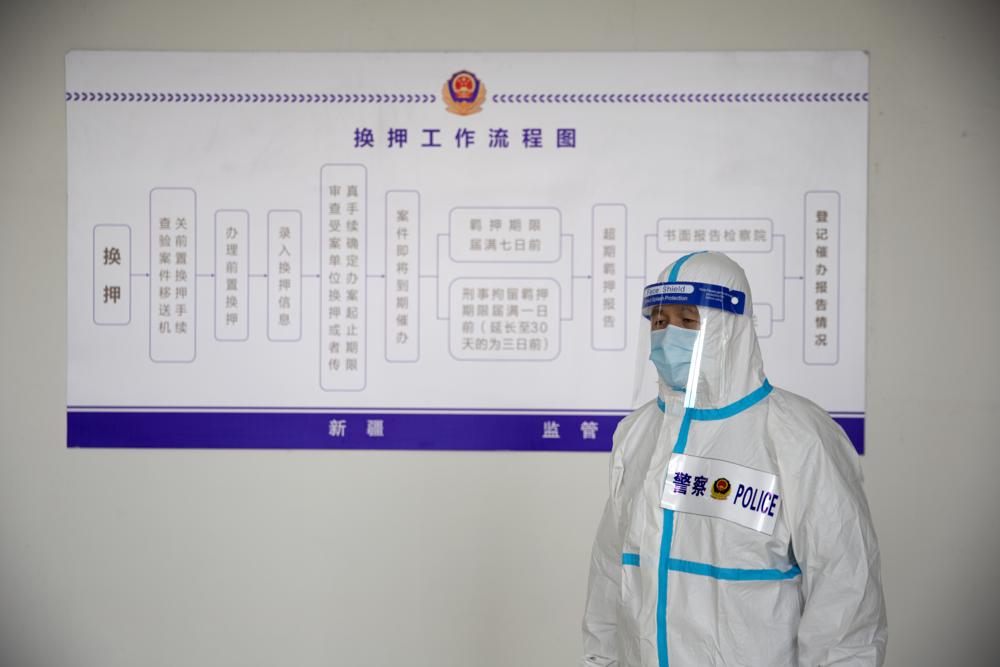 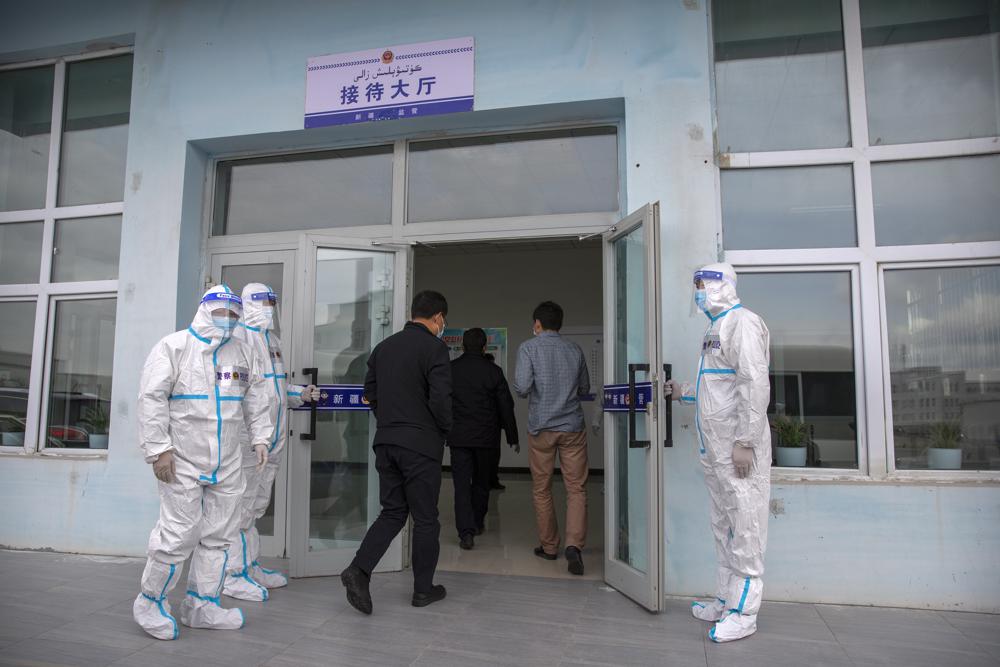 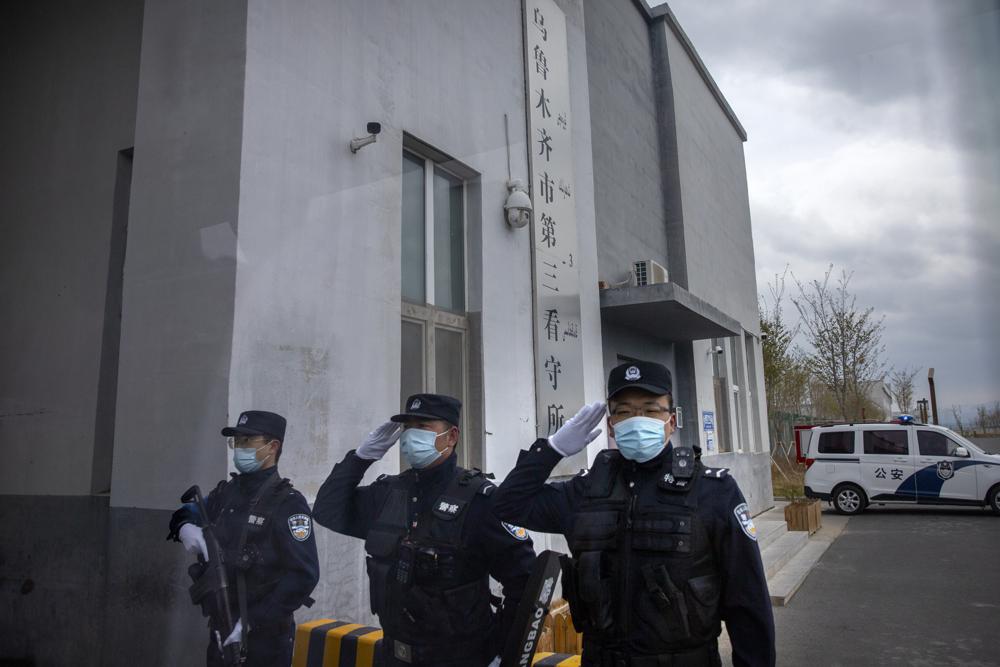 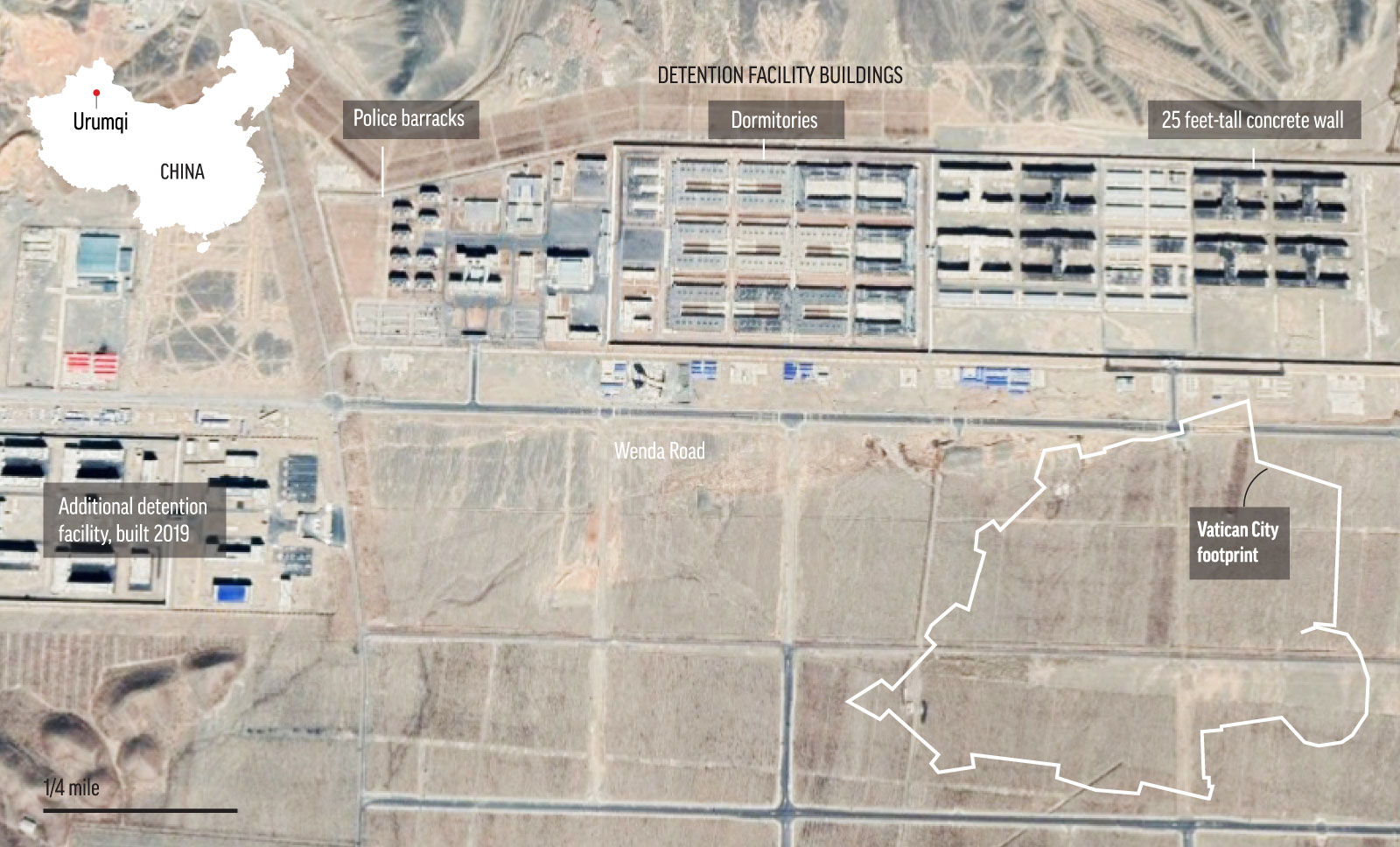