The cost of speaking up against China

In conversations with the BBC over the past few weeks, 22 people who have left Xinjiang to live abroad described a pattern of threats, harassment, and public character attacks they said were designed to deter them from speaking out about alleged human rights abuses back home.

Some of those who spoke to the BBC - from the US, UK, Australia, Norway, the Netherlands, Finland, Germany, and Turkey - provided screenshots of threatening WhatsApp, WeChat and Facebook messages; others described in detail what had been said in phone and video calls. Everyone described some form of detention or harassment of their family members in Xinjiang by local police or state security officials.

She hit answer, but when the picture appeared it wasn’t her sister on the screen, it was a policeman from her hometown in Xinjiang.

“What are you up to Qelbinur?” he said, smiling. “Who are you with?”
This was not the first time the officer had called from her sister’s phone. This time, Sedik took a screenshot. When he heard the sound it made, the officer removed his numbered police jacket, Sedik said. She took another screenshot.

When Qelbinur Sedik recounted the call from the policeman that morning, via her sister’s phone, she buried her head in her hands and wept.

“He said, ‘You must bear in mind that all your family and relatives are with us. You must think very carefully about that fact.’

“He stressed that several times, then he said, ‘You have been living abroad for some time now, you must have a lot of friends. Can you give us their names?’

When she refused, the officer put Sedik’s sister on the call, she said, and her sister shouted at her, ‘Shut up! You should shut up from now on!’, followed by a string of insults.

“At that point I couldn’t control my emotions,” Sedik said. “My tears flowed.”

Before the officer hung up, Sedik said, he told her several times to go to the Chinese embassy so the staff there could arrange her safe passage back to China - a common instruction in these kinds of calls.
“This country opens its arms to you,” he said.

Two other women who spoke to the BBC have been the targets of what appear to be highly staged videos, published by Chinese state media, in which their family and friends insult them and accuse them of stealing money and telling lies. According to a report published last month by the US-based Uyghur Human Rights Project, China has produced at least 22 videos in which individuals are allegedly forced to make scripted statements, often denouncing their family members as liars or thieves.

Another common form of harassment described by those who spoke to the BBC was pressure to spy on fellow Uyghurs and organisations that scrutinise China, often in return for contact with family, guarantees of relatives’ safety, or access to visas or passports.

A Uyghur British citizen who did not want to be named said he was harassed repeatedly by intelligence officials during and after a visit to Xinjiang and told to spy on Uyghur groups and on Amnesty International, by joining the charity as a volunteer. When he refused, he received repeated calls from his brother pleading with him to do it, he said.

Not everyone feels that they can refuse these requests. “When I say no, they get my younger brother and sister to call and tell me to do it,” said a Uyghur student in Turkey, who provided screenshots of the messages from police. “They could send my brother and sister to a concentration camp. What choice do I have?” she said. 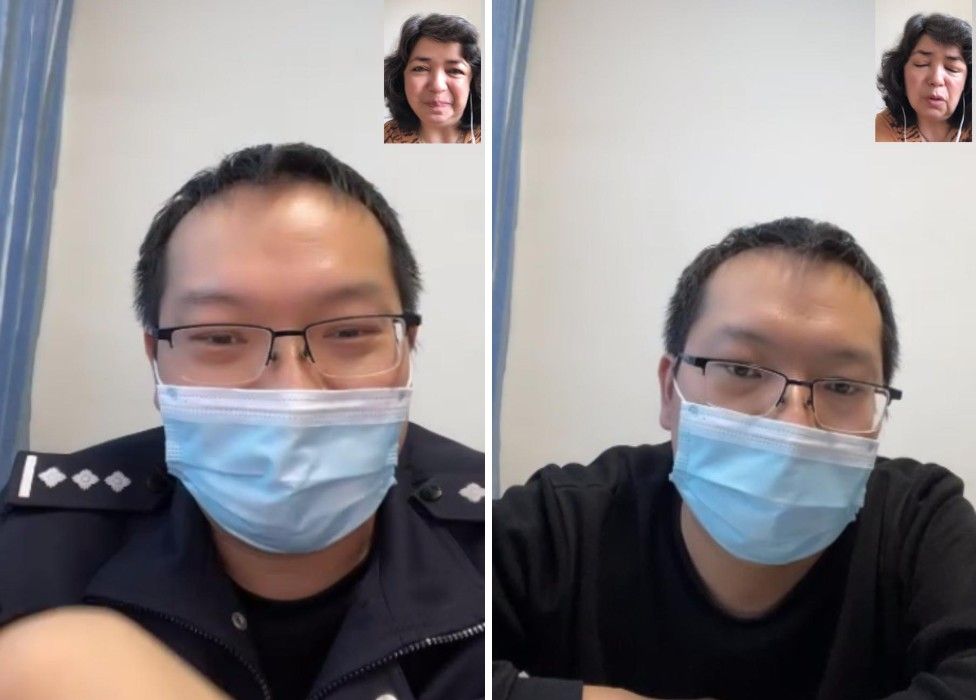