By 2015, lawmakers in Ürümchi introduced legislation that outlawed hijab, lichäk, chumbäl, and jilbāb as well as “abnormally long” beards and clothing featuring star and moon insignia in any public area. These measures effectively discouraged Uyghur women from donning many veiling styles. During my visit to Ürümchi and Turpan, June-July 2017, two years after the veiling ban, I did not observe any women covering their faces with veils or hair in hijab. Some, mostly older, women continued to don a scarf or yaghliq, which they either knotted behind their heads or tied loosely under their chins.
…

Representatives of the All-China Women’s Federation (Ch. funü lianhehui) have organized step-by-step makeover tutorials in several southern counties. During one such event in Qaraqash County, Khotan, a Uyghur beautician taught her peers how to style hair and apply cosmetics. A May 2018 cosmetology training course in Atush called “Let your beautiful long hair down and show your pretty faces,” which “drew on the influence of ‘Project Beauty’” provided instruction on fashion and cosmetics to over two hundred women. A report on the event featured dramatic before-and-after photographs of women who underwent makeovers.
…
To provide rural Uyghur women with access to these new fashion trends, county-level governments launched the “Beauty Parlor and Hair Salon” (Ch. liangfawu) initiative. This campaign has funded the construction of salons across rural Uyghur villages. In 2018 alone, the government boasted 2889 new beauty parlors (each equipped with facial steamers, shampoo chairs, styling chairs, and disinfectants) and 7954 newly certified Uyghur beauticians in Xinjiang’s southern four districts—i.e., Kashgar, Khotan, Aqsu, and Qizilsu. To put these numbers into perspective, government officials built a new beauty parlor for approximately every 3,600 people or one facility per 1800 women in these districts. Residents of Qaraqash County (Ch. Moyu) alone can visit 252 newly-built salons; every village operates at least one business.

Uyghur women are often coerced into cosmetology careers. For instance, over one hundred women from Ulughchat County (Ch. Wuqia) in Qizilsu Prefecture completed a twenty-day “closed-door” (Ch. fengbi shi) course, which required them to live and study, “without charge,” in a vocational facility. In addition to learning the ropes of cosmetology, these women also studied Putonghua and Chinese law. Therefore, their curriculum resembles that of women “studying” cosmetology and hairdressing in the region’s concentration re-education centers.
…

Officials confidently predict that this campaign will transform Uyghur women into docile Chinese subjects. A representative from the XUAR’s Women’s Federation explained that “the Beauty Parlor and Hair Salon initiative will bring forth three transformations in the lives of women. First, women will transform their body image. Then, they will transform their way of life. Finally, they will transform their way of thinking.” Certainly, the beauty parlors introduce new beauty standards. Dozens of photographs depict newly-trained beauticians dying hair, styling it in curlers, applying face whitening cream, and putting thick layers of cosmetics on their clients. However, according to Foucault’s theory, the practices required to maintain this manicured countenance at home—i.e., mimicking a stylist’s techniques and repeating this process daily— inscribe the body with state-produced knowledge and sustain one’s own subjugation. A work team member in Yopurgha County, Kashgar Prefecture claims to have noticed a significant change among women: “Now, women in the village have changed from shy and old-fashioned to cheerful, lively, and generous.” 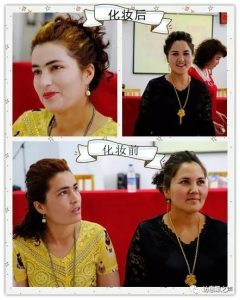 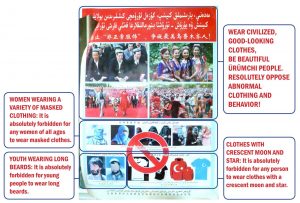