May 01, 2019
Human Rights Watch
Excerpt from this Article Read the Full Article

We know that there are at least two other apps that Xinjiang government officials use to gather personal data from residents: an app for Xinjiang officials when they conduct intrusive home visits (“新疆入户走访”), and another app for collecting data on migrant workers (“基础工作小助手”). While we have not had access to them, some local government reports state that the data collected via these other apps feed into the IJOP [Integrated Joint Operations Platform] system.

Search function: The IJOP app allows officials to search for information about people using their name, ID number, household number used to access public utilities (户号), and building address (see Appendix III). In addition, officials can access, upon approval of their superiors, the “full profile” of a given individual.

Wifi detecting: The IJOP app appears to collect data about wireless networks in range of the device. The collected data includes SSID (the service set identifier, or the name of a Wi-Fi network), encryption method, and GPS locations. Our technical investigation suggests that this possibly serves the purpose of creating a map of the existing wireless networks in the region, also known as “War Driving.” This function could also potentially be used to identify and target weakly secured wireless networks and to join them for the purpose of surveillance and infiltration. It can also be used to understand the population density, connectivity, and the produced data volume of a given area. However, it is unclear how this functionality—or the data it gathers—is used.”

“In screen 1, officials are prompted to choose the circumstances under which information is being collected by using a drop-down menu. The five choices are:
“during home visits,”
“on the streets,”
in “political education camps,”
“during registration for those who travel abroad,” and
“when collecting information from whose ‘hukou’ (or registered residency) is in Xinjiang but living in the mainland.”

Although not shown on the screenshot, officials with “administrative rights”—likely higher-level officials—are also presented with a sixth choice: “when collecting information from foreign nationals who have entered [Xinjiang].”

Officials are then prompted to log and submit to the IJOP central system a range of information about the person, from the person’s height, to their blood type, to their political affiliation.

there are 36 “person types” to whom the authorities are paying special attention.

The most interesting—and revealing—part of the app is the group of tasks called “investigative missions” (调查任务). Mission instructions are sent directly via the IJOP central system to officers, requiring them to investigate certain individuals, vehicles, or events and provide feedback.

In screen 3, officials are prompted to collect further identifying information about people’s vehicles by opening related screens with information about the vehicle, including color and type, as well as the license plate number and a picture of the vehicle. Entering such information presumably enables cameras equipped with artificial intelligence capabilities to recognize and keep track of the vehicle as it travels and passes through vehicle checkpoints.

Officials are also prompted to log whether the people in question use a list of 51 “suspicious” internet tools, and if so, their account number.[61] Most of these tools are foreign messaging tools, such as Viber, WhatsApp, and Telegram, but also include Virtual Private Networks (VPNs).”
“Officials are also prompted, through related screens, to log individuals’:
Bank information (which bank they use and the bank account number),
Family members (name, ID number, relationship, phone number), and

“Suspiciousness,” and, if so, explain whether they require further investigation.” 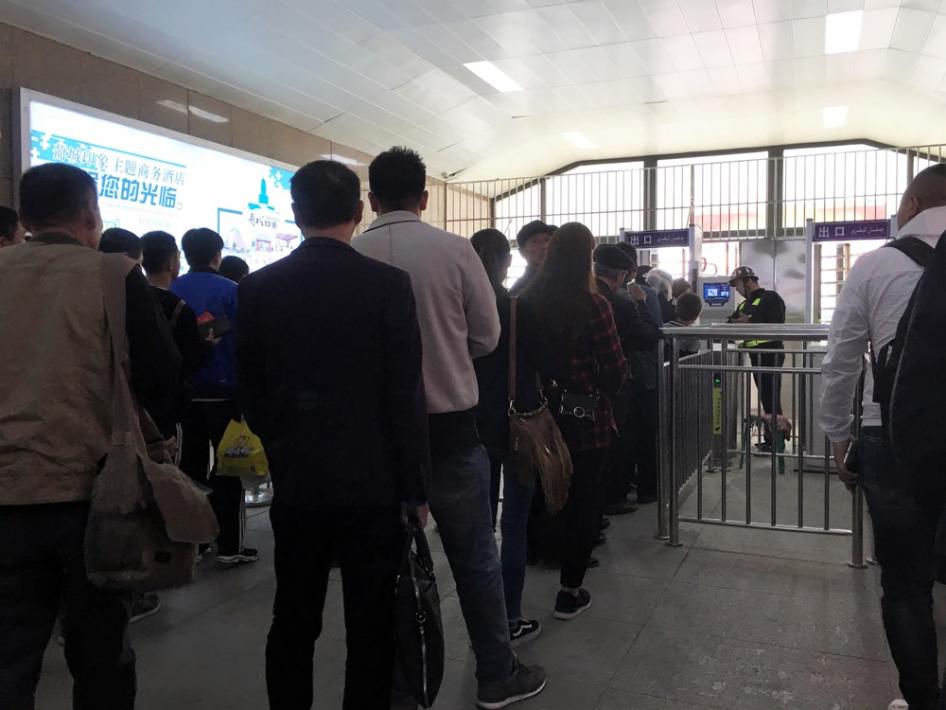