Authorities in northwestern China’s Xinjiang region have ordered shop owners and restaurateurs in a mainly Muslim Uyghur village to sell alcohol and cigarettes or face closure of their establishments, despite a public backlash against the products discouraged by followers of Islam, an official source said.

Last week, authorities in Laskuy township, in Hotan (in Chinese, Hetian) prefecture’s Hotan county, issued an announcement in the town seat of Aktash village that “all restaurants and supermarkets in our village should place five different brands of alcohol and cigarettes in their shops before [May 1, 2015].”

In addition to directing owners to create “eye-catching displays” to promote the products, the April 29 announcement stated that “anybody who neglects this notice and fails to act will see their shops sealed off, their business suspended, and legal action pursued against them.”


Signed by the Aktash village Party Committee of Laskuy township, the notice stated that the order had been handed down “from the top echelons of [China’s ruling Communist Party], in order to provide greater convenience to the public.”
…

Sulayman said that abstention from alcohol and cigarettes had become common in Aktash and other parts of Laskuy, with some 70-80 percent of people between the ages of 16 and 45 refraining from drinking and smoking, and while there is no official rule within the Muslim Uyghur community against selling the products, doing so was considered “taboo” for religious reasons.

He said that as the seat of Laskuy, Aktash was meant to serve as an example to all residents of the township, and his village party committee did not raise the issue of a potential public backlash against the decree when it was first proposed by party leadership.

“We have more than 60 restaurants and stores in our township and I was told that all of them began stocking alcohol and cigarettes within three days of the announcement, but I didn’t inspect the businesses myself,” Sulayman said.

“I do not know whether people were unhappy about it or not, but I only heard that one person argued and one other agreed to do it after talking to the party secretary,” he said.

“Our village is the key village—we have to implement the ‘Weaken Religion’ campaign effectively … Religious sentiment is increasing and this is affecting stability.” 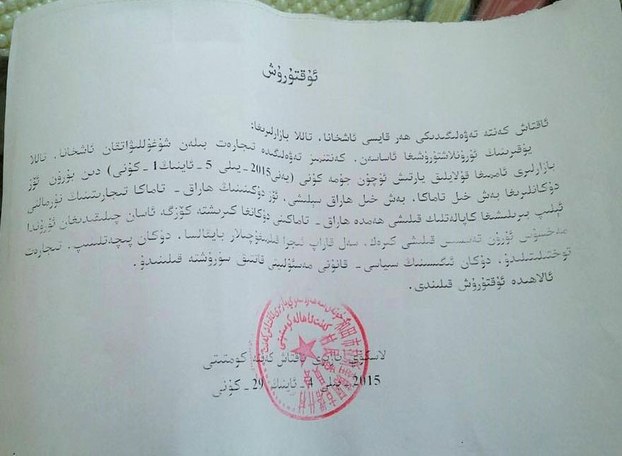