On a cold Melbourne afternoon in June this year, 34-year-old Gulnur Idreis’s phone started to ring. It was a video call coming from her elderly parents in Xinjiang, China. Any contact with them was precious.


Like all members of the Uyghur Muslim minority in China, they had spent the past two years living through a dystopian nightmare.

In early 2017, the Communist Party began a new incarceration campaign, rounding up, detaining and forcibly indoctrinating Uyghurs and other Muslim minority ethnic groups in the far-western region. Islam has effectively been outlawed in the far-western region, with people routinely labelled as extremists and imprisoned for practising their religion.
…

Whenever they could, Gulnur’s parents in Urumqi would quickly call her in Melbourne on the Chinese social media app WeChat to let her know they were OK.

The calls couldn’t last long. The Chinese government can monitor all communication in the region. Contacting relatives overseas is enough to get Uyghurs sent off to a camp.

When Gulnur answered the call that afternoon, she was shocked to see the face of her older sister, Dilnur.

In February 2017, 38-year-old Dilnur and her husband were both arrested and sent to camps. A qualified nurse, Dilnur had spent years working at the hospital attached to Xinjiang Medical University.

Fearful of authorities listening in, Dilnur quickly began to desperately scribble out a series of notes and held them up for her sister in Melbourne to read.

She said that in May she was sent from the camp to work against her will in a factory and that she wanted Gulnur to take the dangerous step of telling the world her story.

“She wrote this down and showed it to me and I saw it,” Gulnur told Four Corners.

Gulnur quickly took screenshots of the notes that described what was happening to her sister:

“660 people are brought in shackled and handcuffed and it is big,” she said.

“They have no choice, they will end up in jail, if they say something.

“Tell them it has been two years, [I have] not been released.

Most disturbingly, Gulnur said her sister kept motioning that she wanted to end her life, running her hand across her neck.

“She looked very exhausted and emotionally very distressed. She doesn’t like to live anymore,” Gulnur said.

“She said for me, please help me. If I can’t [get] out of this place, you can tell the international [community], the government. Whatever you can do.”

Dilnur still doesn’t know where her husband is.

Using the screenshot of her employee ID card, Four Corners has tracked down the company Dilnur says she is being forced to work for.


It appears to be a textile company called Urumqi Shengshi Huaer Culture Technology Co, based in a technology park 30 kilometres north of Xinjiang’s capital, Urumqi.

Dilnur told her sister that she sleeps in the factory dormitory and that she’s only allowed home once a week to see her children and parents.

She said her eyesight is poor and if she can’t do the complicated embroidery required, then she is forced to clean the factory.

“My sister is a nurse. She didn’t know how to make the clothes,” Gulnur said. 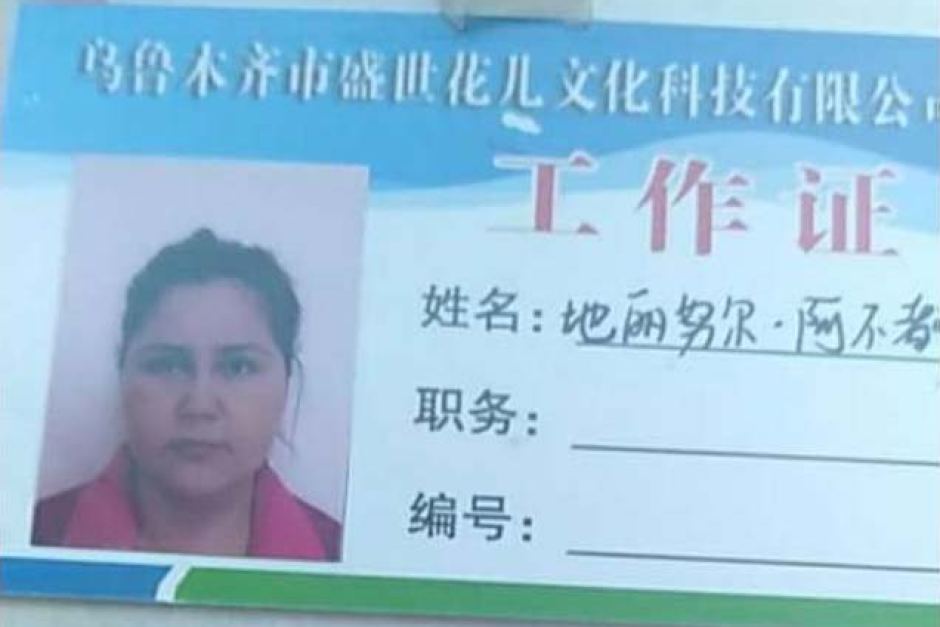