The weekly or daily song and dance sessions are not limited to traditional elements or Red Songs. In recent years the Chinese pop song “Little Apple” has often featured in these events, and as a modern pop song it has become part of a repertoire to help promote “development and modernity.” Particularly controversial are the images of imams dancing to the tune which have appeared in the Chinese media. The image of Uyghurs performing a combination of new and traditional dances to a modern Chinese pop song is intended to display their loyalty to the state, rejection of “extremism,” and celebration of the benefits of modernity which the state provides. One video, which went viral according to the Chinese media, shows elderly Uyghurs from a Poksam County meshrep cultural group dancing to the song to show that they “won’t allow ruffians to disturb our carefree and happy life,” and “their desire to enjoy modern culture.” The performance also served to promote local tourist attractions such as the local folk culture village and the Yarkand River Wetlands National Scenic Area. One report written by an anonymous Uyghur which appeared in a Hong Kong media outlet acknowledged that the dancing was mandatory, but claimed that locals supported the de-radicalization campaign, including imams who had initially disapproved of the dancing later encouraging their family members to participate and participating themselves. The authorities have even tried to promote the concept of a “Dolan Little Apple” style of dance, to match the traditional Dolan Meshrep. Massive public displays of the modern dance have been staged in places like Mekit County’s culture square. The square, prominently featuring hanbiao columns and Shang dynasty style bronze ding braziers, does not place a particular emphasis on Uyghur culture. The square also serves a use for displays of force by the militarized police, in addition to dancing.

Authorities from a variety of CCP organs organize this type of local cultural performance. For example, the Xinjiang Production and Construction Corp’s (bingtuan) Party Committee Propaganda Department work committee arranges dates for activities and for the masses to “spontaneously” dance the meshrep and “Little Apple,” or put on Chinese cultural performances of Peking opera to build bingtuan/masses solidarity. The People’s Liberation Army encourages soldiers to learn folk dances to “make friends with the minority masses.” Mass demonstrations of Chinese cultural practices are also encouraged by the authorities and organized by officials, for example thousands of “cadres and people of all ethnic groups” gathering to “Sing the National Anthem and Practice Tai Chi” in Yarkand in 2016, or organizing tai chi demonstrations by Uyghur high school students. 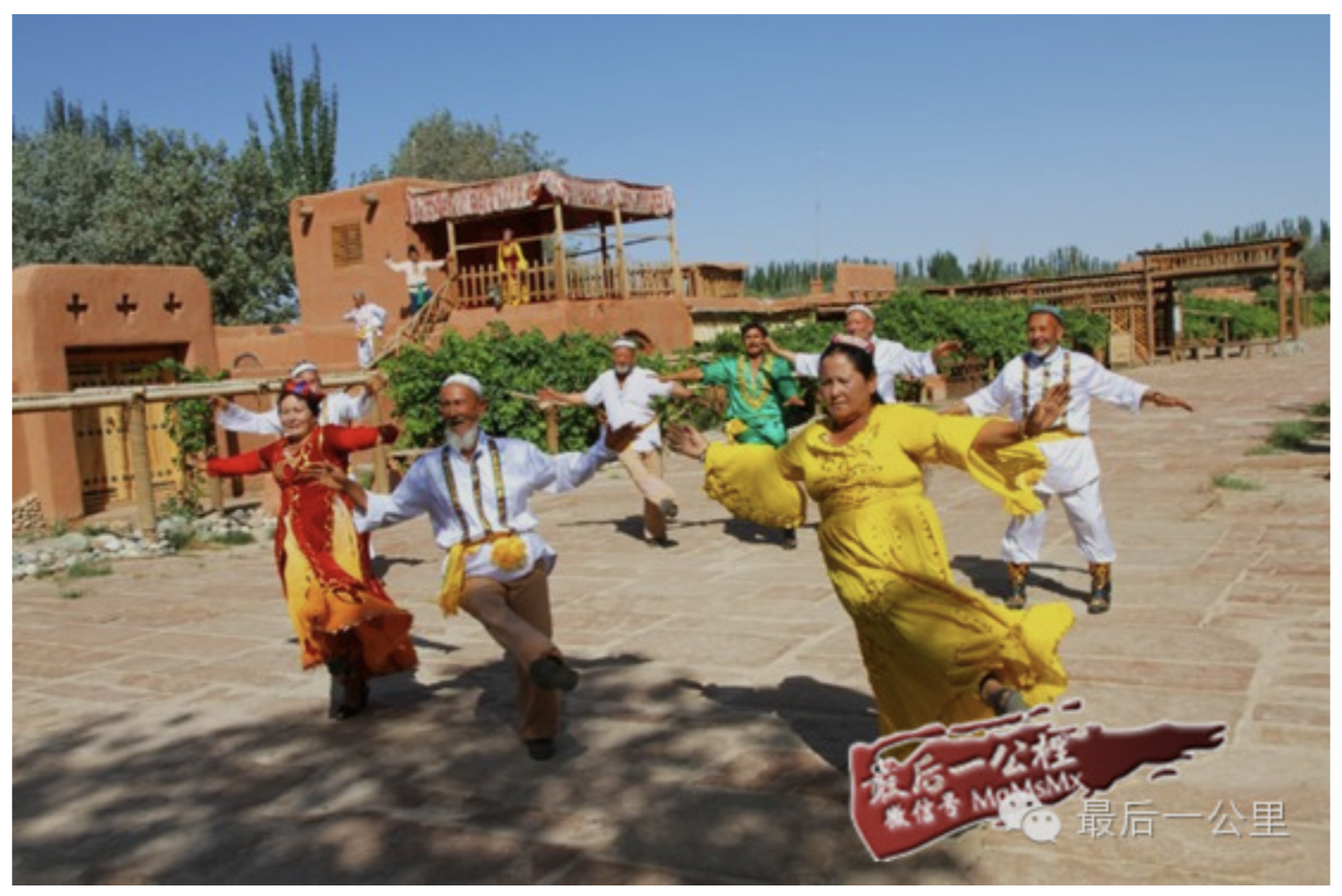 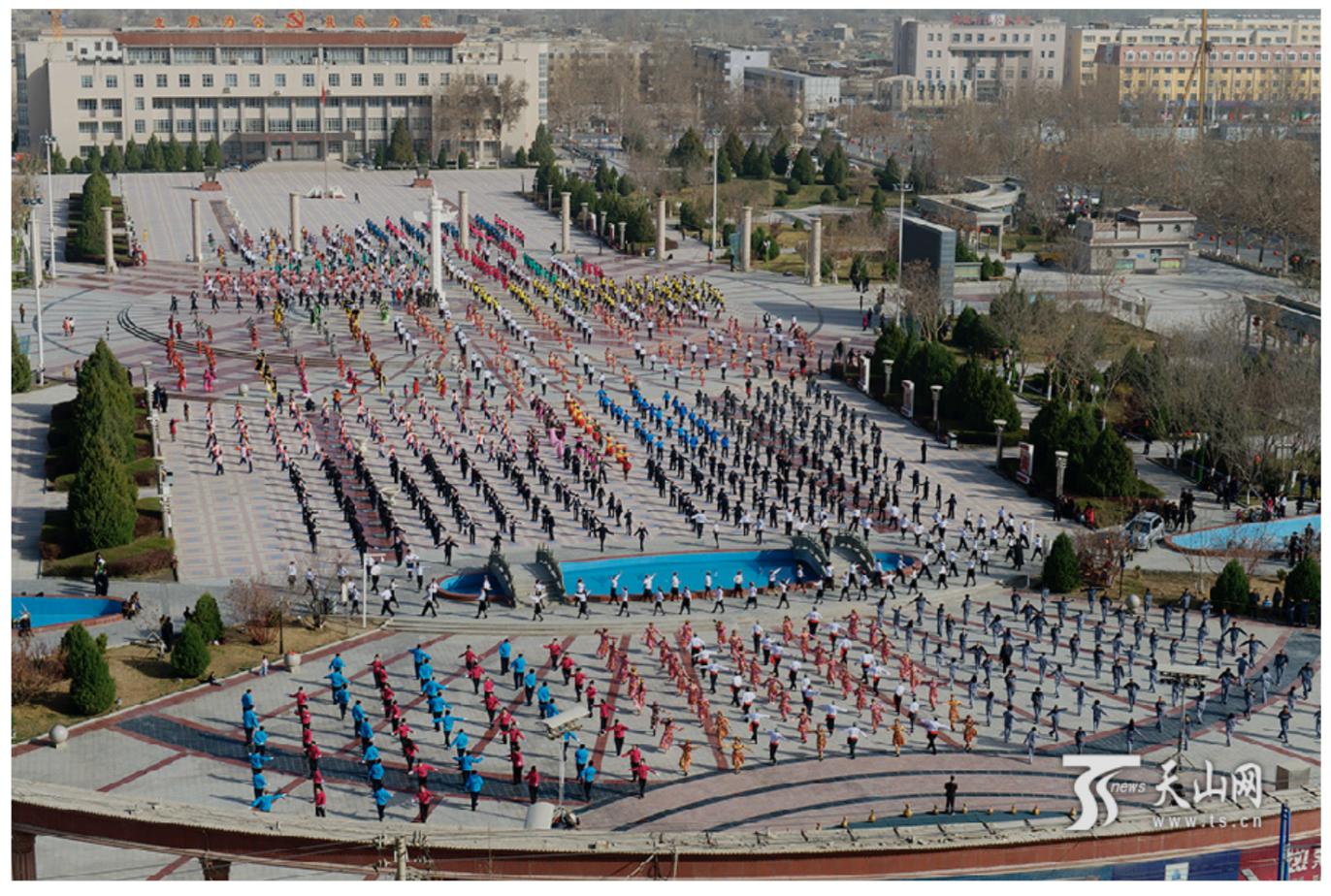 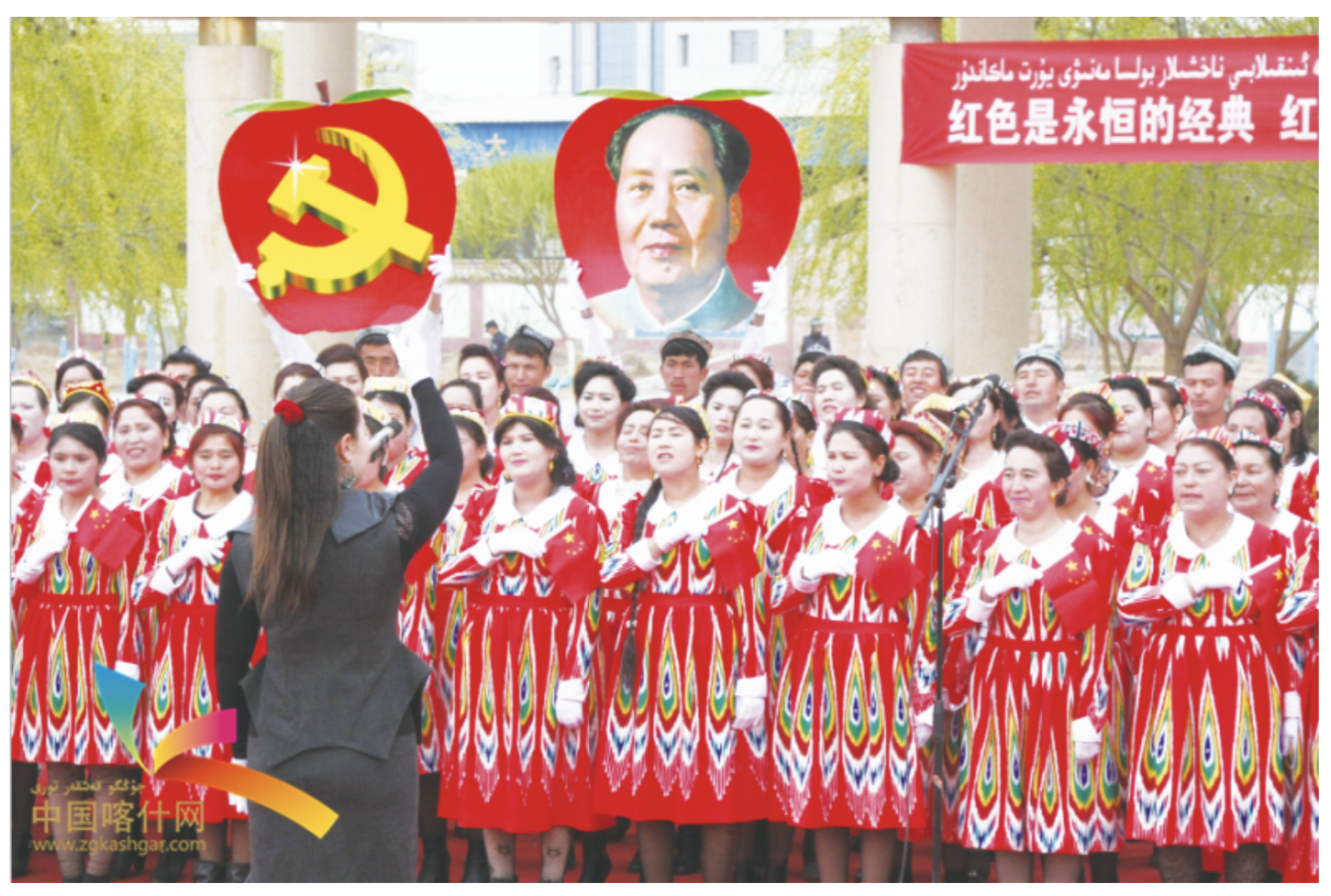 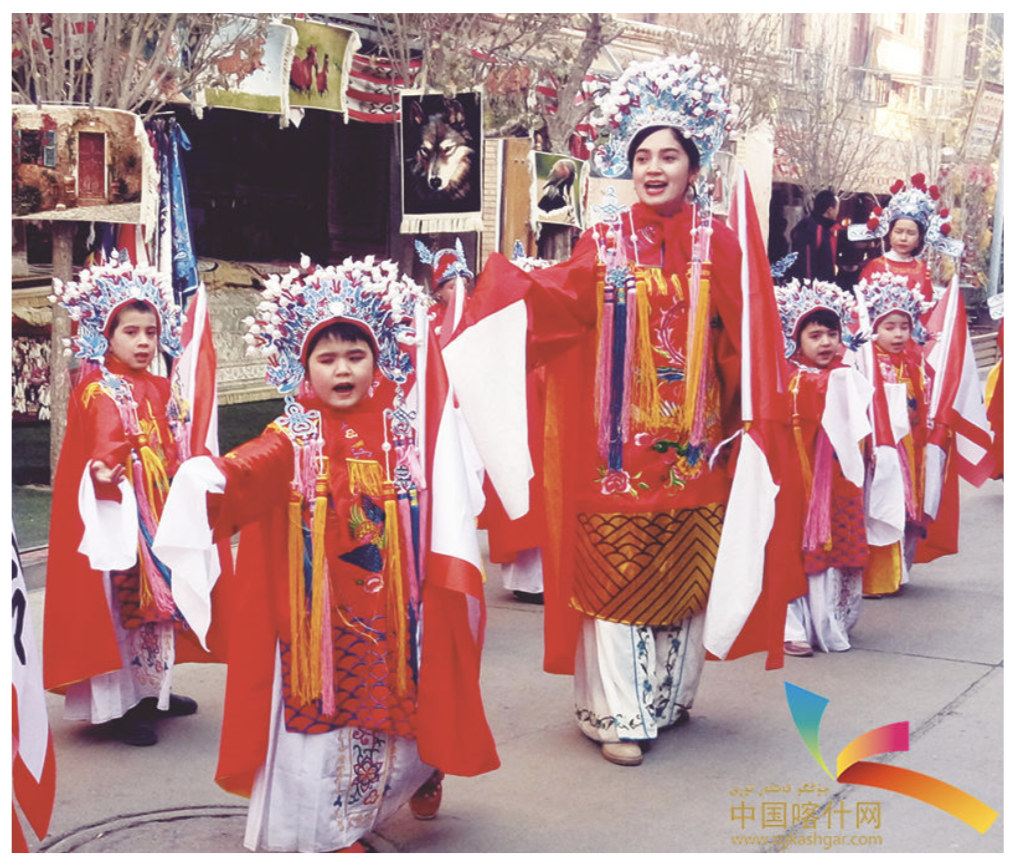 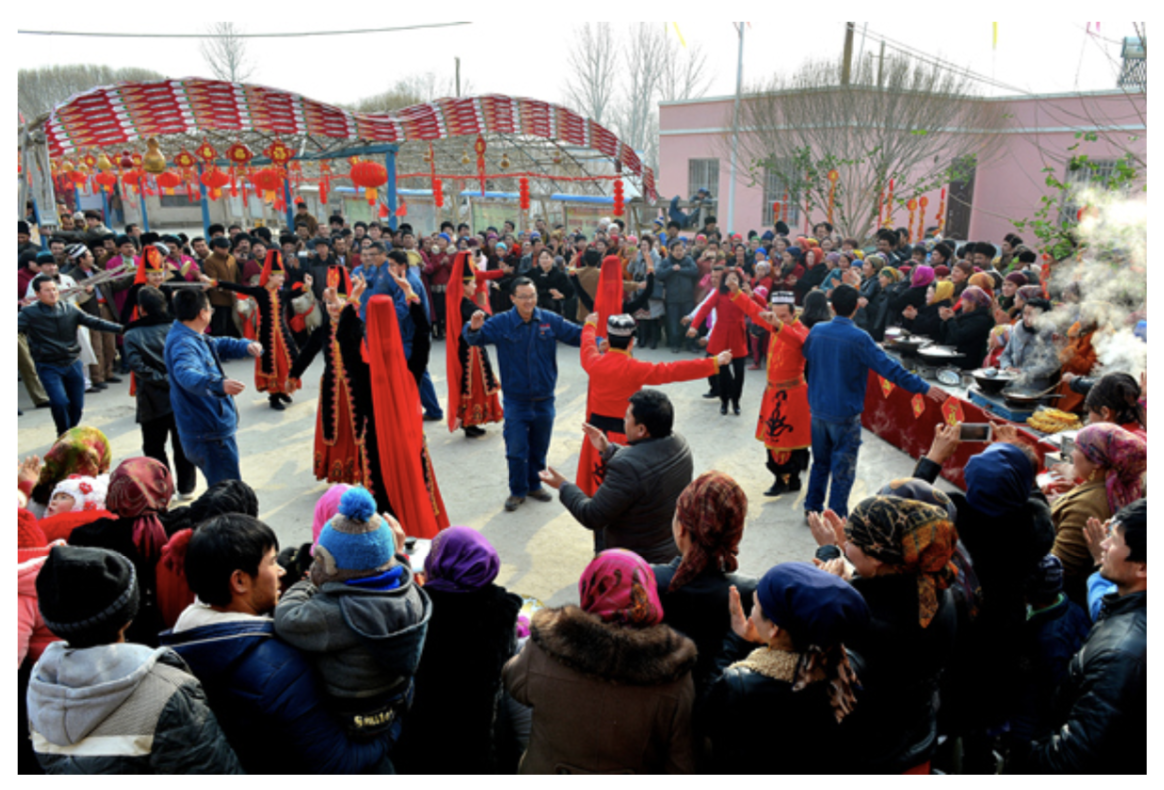 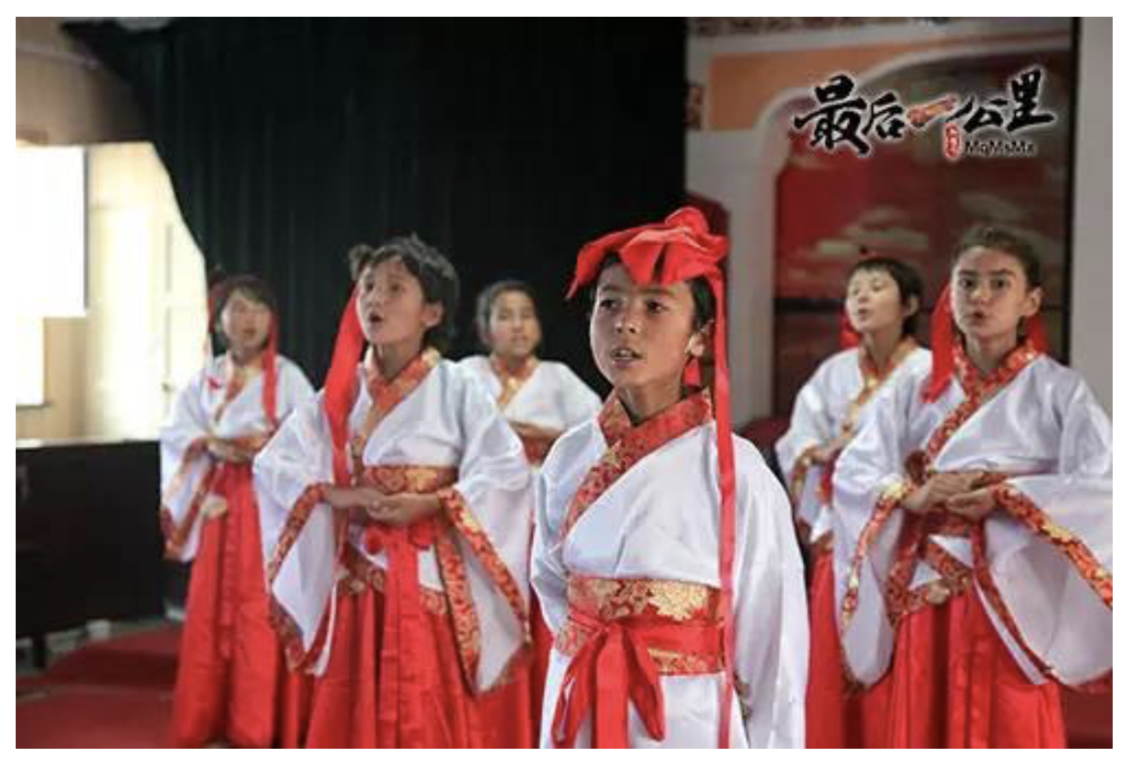