Orphaned by the state: How Xinjiang’s gulag tears families apart

October 17, 2020
The Economist
Excerpt from this Article Read the Full Article

The work groups’ records use a chilling official terminology to refer to children whose parents are being held by the state. They are called dankun (“single-hardship”) or shuangkun (“double-hardship”), depending on whether one or both parents have been sent away to a vocational-training camp in the new gulag, a regular prison or another kind of detention facility . . . The tearing apart of Uyghur families has been so rapid that local governments have struggled to accommodate the surge in the number of children who have lost parents to internment. Indeed, the documents show that some double-hardship children have been placed in institutions meant for children whose parents have died or left them. Governments are rapidly expanding and transforming primary schools into boarding facilities, many of them with high-security fences. Even pre-kindergartens are being adapted for boarding. Infants only a few months old have been placed in them. In Xinjiang, the floor-space of student dormitories in boarding schools grew by more than 30% in 2019 compared with less than 5% in China as a whole.

At the boarding schools where hardship children are sent, the plunge into a Mandarin environment is likely to exacerbate the pain of separation from their families. But having to grapple with a strange language is only part of the remoulding they face. Some Han teachers in Xinjiang have posted videos on social media to show how “interethnic unity” is promoted in schools, with Uyghur students sometimes required to wear traditional Han costumes and sing patriotic songs. 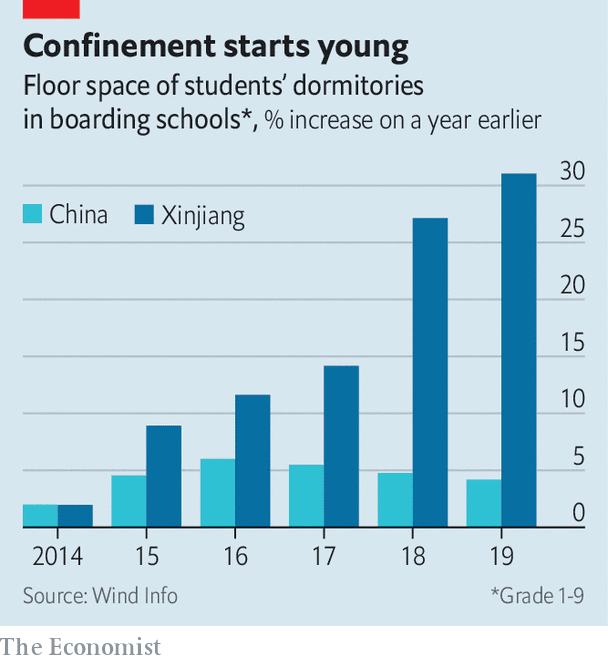