The Spatial Cleansing of Xinjiang: Mazar Desecration in Context

August 24, 2020
Made in China Journal Rian Thum
Excerpt from this Article Read the Full Article

Sometime between 10 and 17 March 2018, on a high sand dune 75 kilometres from the town of Niya, a beloved historical monument disappeared . . . For at least 450 years the site had drawn pilgrims from across the expanse of Altishahr, the southern half of what is now known variously as Eastern Turkistan or Xinjiang . . . Pilgrims came to be in the presence of Imam Je’firi Sadiq—a founding father and hero who had died there a thousand years earlier, while bringing Islam to their homeland . At his tomb they wept, prayed, and gained blessings from contact with the physical structure.

The white-painted tomb had the shape of an ordinary grave marker, but on the scale of a giant, like a grave for someone six metres tall, resting on a platform fifteen metres square. Some pilgrims wrote graffiti in a wooden, box-like prayer house erected in the sand nearby, recording their shared presence with the saint in the very location where their society and their history were born. All around, flags and strips of cloth whipped loudly in the wind, thousands of offerings tied to various sacred structures, testifying to the crowds of fellow Uyghurs who had come over the years to venerate this point of historical origin and connection to the divine. In the early autumn, pilgrims came in especially large numbers, cooking communal meals in a gigantic pot and sleeping near the site. All of this disappeared in the middle of March 2018, leaving an empty dune.

In the ensuing two years, the Chinese state has destroyed and desecrated Uyghur historical and holy places at a scale unprecedented in the history of Eastern Turkistan (Altishahr, Xinjiang) as a Chinese-dominated region. Among the demolished places were mosques, and these have received the bulk of international media attention. But another kind of sacred site, less legible to outsiders, has arguably been a more significant crux of desecration. This is the mazar, a point on the landscape that holds particular numinous authenticity, a connection to and presence of the divine that surpasses the sacredness even of the mosque as a physical structure.

Authorities in Xinjiang clearly share some awareness of the power of mazars. The circumstances of Imam Je’firi Sadiq’s destruction show that it was the mazar itself that attracted the authorities’ attention, not the economic value of the land. The remote and barren dunes on which the mazar stood have no other use. Elsewhere, some aspects of China’s assault on sacred spaces have involved economic incentives. Over one hundred graveyards have been destroyed across Xinjiang in the last three years, in some cases making valuable urban land available to developers or the state . . . But Je’firi Sadiq’s destruction paved the way for precisely nothing. Destruction seems to have been the point in and of itself, not a sacrifice to some economically valuable end.

For decades authorities have been nervous about the large festivals (seyla) that some mazars inspire. Officials across China tend to be wary of potential for independent gatherings to create alternative sources of political power or develop into protests. Across those decades, however, the state demonstrated that complete destruction of a mazar is not necessary to prevent gatherings. For over twenty years authorities have prevented mass pilgrimage to the only site more revered than even Je’firi Sadiq’s mazar: the Ordam Padishah mazar, located in the desert outside of Yengisar. The occasional lucky or connected party slipped through the police net from time to time (I was arrested when I tried), but the famous festivals of Ordam Padishah, with their tens of thousands of attendees, were successfully killed off . . . Based on my own visits, I can confirm the same for Chūje Padishahim mazar (near Yengisar), Ujme mazar (near Khotan), and, more recently, Imam Asim mazar (also near Khotan). Even Je’firi Sadiq itself had already been closed to all pilgrimage sometime after my successful 2007 visit, and I was turned away when I returned in 2015. The destruction was not needed to prevent pilgrimage; destruction appears to have been an end in and of itself.

The shortest distance from Ordam Padishah to cultivated land is 14 kilometres, over soft sand and high dunes. The expense and effort required to bring equipment capable of obliterating Ordam’s network of monuments, mosques, rest houses, and mounds in the open desert must have been substantial . . . As at Je’firi Sadiq, the land around Ordam Padishah is remote and barren, and the shrine has been replaced with nothing; destruction of the Uyghurs’ most sacred site seems to have been the goal, part of the government’s broader efforts to define and control Uyghur material culture and history.

Full obliteration of the sort that Je’firi Sadiq and Ordam Padishah suffered is not the only attack that Uyghur holy places have suffered. The wave of mazar closures of the last three decades was already a form of destruction. Mazars are continually created and re-created through pilgrimage. Their structures accumulate mass as pilgrims bring flag poles, cloth lengths, sheep horns, oil lamps, animal skins, and other ephemeral offerings. The offerings pile up and the accumulated flag poles sometimes reach ten metres into the sky. The slow deterioration of wood, cloth, and skin testifies to the age and continuity of pilgrimage. The constant replenishing of the flags and skins manifests the continued power of the mazar over its constituencies, and reminds the pilgrim that his devotion embeds him in a community larger and less knowable than the circles of his home village. Shrine closure interrupts this continuous production of the sacred site.

At the mazar of Imam Asim, near Khotan, it almost looks like local authorities share this understanding of continual incarnation through pilgrimage. Recent photos show that the mudbrick structure of the tomb itself was unharmed as of 2018 (MarcelTraveller 2018). But the site is unrecognisable. The associated mosque has been demolished. The mazar proper has been denuded of its flags, offerings, and wooden railings. The grave marker, which sits atop a low mudbrick building, was previously invisible behind a forest of pilgrims’ flags, their poles affixed to the wood fence on the building’s roof. It now stands naked, motionless, and monochrome, shorn of the colourful, flapping attire of sacred offerings. Authorities have stopped one step short of total obliteration. But they have crossed the wooden fence into a zone that is forbidden even for most believing pilgrims, and desecrated the mazar by denuding it of its external display of community veneration.

Full demolition and desecration have so far been aimed at mazars that have drawn large crowds, have region-wide reputations, and have not been museumified. My fieldwork among pilgrims conducted between 2003 and 2017, combined with historical documentation, suggests that among the hundreds or thousands of Uyghur mazars, five have exceptionally strong and historically deep regional reputations for holiness . . . The destruction of Imam Jafiri Sadiq and Ordam Padishah has now taken two of those most widely revered mazars off the map. The remaining three have physically survived as museumified destinations for Han Chinese and foreign tourists.

As discussed above, the most widely renowned mazars appear to have been disproportionately targeted for destruction. However, a large number of very minor mazars have also been destroyed, not because they are mazars, but because they sit in one of over 100 Uyghur graveyards that the Chinese state has demolished since 2017. Many Uyghurs have thus witnessed, in one act of destruction, the simultaneous desecration of their family members’ graves and the demolition their local mazars, sites which, despite not attracting substantial numbers of long-distance pilgrims, held similar connections to the divine and to community history at a local level. 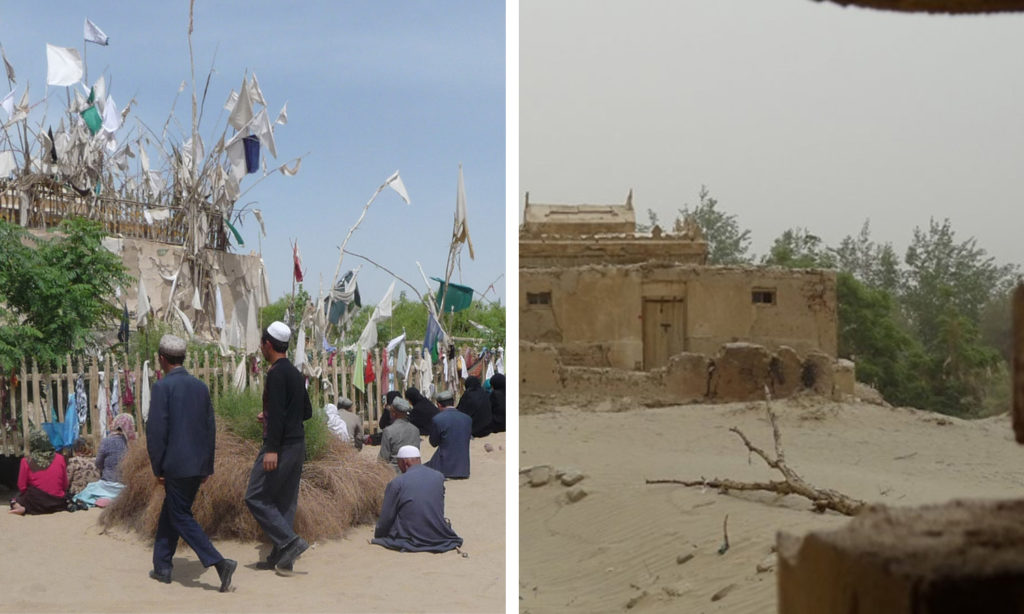