Coming to fame during a period of growing political tension and rising Islamic piety, Ablajan faced problems on all sides. He was disliked by religious conservatives for his bi-lingual songs, his less than macho image and for agreeing to appear in state ‘anti-extremism’ propaganda. He was interviewed by the BBC in 2017 and portrayed as a model of integration, an artist who could reach out to Uyghur and Chinese audiences and build bridges.

Neither this, nor his fame and many awards at a national level, were sufficient to protect him from arbitrary detention. Ablajan disappeared in February, on his way home to Urumchi following a recording trip in Shanghai, reported the Financial Times on 21 March 2018.

In one of his most popular songs, Dear Teacher (Soyumlik Muellim), Ablajan plays the role of a schoolteacher in a classroom infinitely more glamorous than the one he originally taught in, promoting an ideal curriculum that included maths, science and Chinese, but which—controversially—was headed by a lesson in Uyghur language and literature.

Since Uyghur language school education has been phased out over the past ten years, and Uyghur children are now required to study in the Chinese language, this may have been enough to earn him the label of ‘two-faced intellectual’, a charge now being levelled at many Uyghur public figures whose commitment to their own culture is now equated to a lack of loyalty to the Chinese state, and an imprisonable offence. 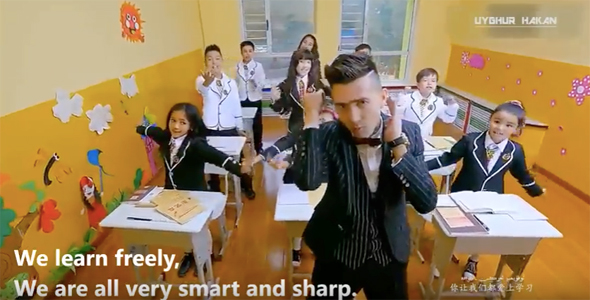