“Authorities in northwest China’s Xinjiang Uyghur Autonomous Region (XUAR) are making “preparations” in advance of international monitors who might start investigating reports of mass incarcerations of ethnic Uyghurs by improving the appearance of political re-education camps and warning residents against speaking out about the facilities, according to sources.

Of the 5,700 detainees at No. 2 Re-education Camp, 2,700 had been transferred to No. 1 and No. 3 camps, the source said, speaking to RFA on condition of anonymity, and authorities are removing all barbed wire from the perimeter of the camp walls, as well as other security measures, such as metal bars on the doors and windows.

If anyone is asked by the inspection team how many camps exist in Awat, residents should say only one, the source added.

The source provided RFA with a copy of a “confidentiality agreement” authorities in Awat are requiring re-education camp detainees to sign, which states that they will not discuss the workings of the camps, accept any interviews, or use communication channels such as social media or SMS messaging to disseminate information about the camp system.

[O]fficers at police stations in Kashgar (Kashi) prefecture’s Kargilik (Yecheng) county recently told RFA that an inspection team is believed to be arriving there within weeks, and said preparations were underway for its arrival.

[T]he officer confirmed that authorities had been coaching residents to refrain from saying negative things about the local government or mentioning the re-education camps, and that they had been removing barbed wire and CCTV cameras from the camps.

A businessman from Ghulja (Yining) city, in Ili Kazakh (Yili Hasake) Autonomous Prefecture, who is trading in neighboring Kazakhstan, recently told RFA of a similar situation in his hometown.

“I have heard that officials are visiting households door to door, informing people that there is an inspection team coming soon,” he said. “People are taught what to say, and they were warned not to mention the difficulties they are facing.”

According to the businessman, who also declined to provide his name, residents were told to “praise the [Communist] Party’s policies” and to “say only good things about the government.”

They were also warned that there “may be foreigners among them,” so they should refrain from mentioning anything about re-education camps.

The businessman said that his colleagues who had been to Ghulja in recent weeks had seen national flags, which are hung every 50-100 meters (165-330 feet) along streets in the city, replaced with “decorative reproductions of Uyghur musical instruments.”

“I also heard that people are being trained to sing and dance, and were repeatedly told that they must look happy and enthusiastic when visited by the inspection team,” he said. “Authorities tell them, ‘to show your contentment with life, you must dance happily, and everyone must smile joyfully. No one may look sad, otherwise there will be consequences.” 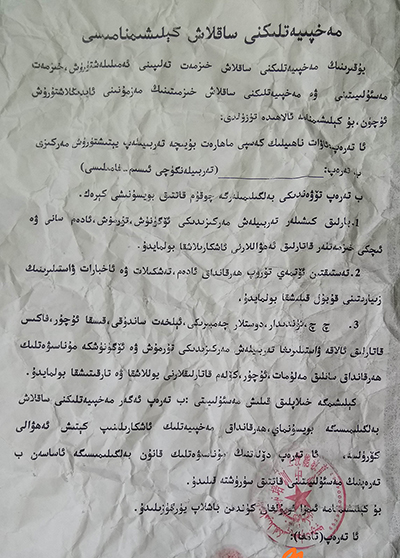